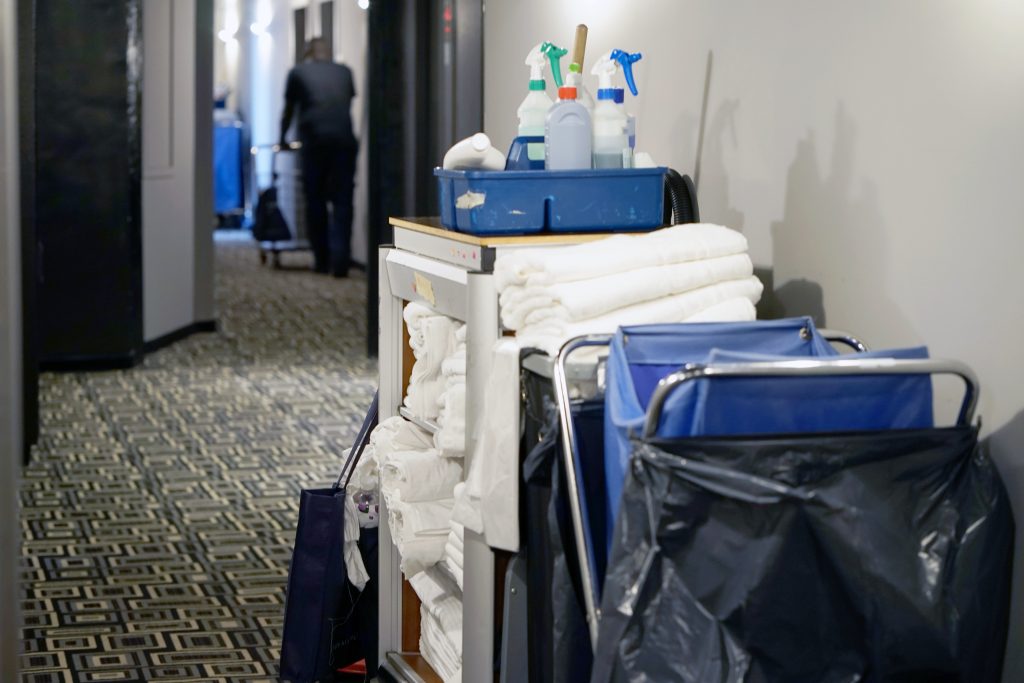 Local 11’s Latest Contract: Good for the Union, Bad for the Environment

Unite Here Local 11 workers at the Hilton in Anaheim finally approved a new contract this week. The union won multiple concessions from the hotel including an unusual stipulation that the hotel chain cannot “introduce programs that allow guests to go without room cleaning for several days.”

Since Marriott acquired Starwood Hotels and expanded the company’s Make a Green Choice program, hotels across the country have moved to reduce their environmental footprint by allowing guests to skip housekeeping—encouraging them to reuse towels, and cut back on the energy, water, and chemicals used to clean their rooms.

The benefits are substantial: At Marriott’s Sheraton Boston Hotel, for instance, a hanging doorknob sign informs guests that each day they skip housekeeping, they save “37.2 gallons of water, 0.19 kilowatt hours of electricity, 25,000 BTUs of natural gas, and 7 ounces of cleaning products.” In fact, Marriott claims to have “lowered its energy use by 13.2 percent, its water use by 7.7 percent and its greenhouse gas emissions by 15.8 percent between 2007 and 2016” thanks to this energy-saving program.

Despite the positive environmental impact, Local 11 has fought against these green policies at Marriott hotels by leafleting guest’s rooms and asking them to “Say NO to Marriott’s Green Choice.” Local 11 claims these policies “hurt workers,” but they likely just hurt the union’s bottom line by reducing the number of dues-paying members they can recruit.

This new contract should be of unique interest as the City of Santa Monica looks for ways to “reduce carbon emissions and become climate resilient.” Mayor Gleam Davis referred to the city’s Climate & Adaptation Plan as a “call to action for our government, businesses, and residents.” But what will happen to Santa Monica hotels that look to similar green policies as a way to participate?

In order to achieve its environmental goals, the City Council should prepare to take on its union pals—or else risk going back on its promise to residents.